Samori Covington, a young poet based in Brooklyn, has already had her work turned into a song, performed by an opera singer, and premiered at Carnegie Hall.  And she’s only 12 years old!

Samori, who wrote the poem “When Randa Wears Red” when she was just 8 years old , was part of the Phat Phun Tuesdays workshop headed by Angeli Rasbury at the Eastern Parkway and New Lots branches of the Brooklyn Public Library, along with two other girls, Alexis Cummings and Najaya Royal.  Each girl had one of their poems selected for the I Hear America Singing initiative, founded by Greg Trupiano of The Walt Whitman Project and our very own Executive Director Charles Jarden, which were then turned into the song cycle Songs from the F Train by composer Gilda Lyons.

The songs were premiered in the Fort Greene Literary Festival in 2009, although they’ve since been performed at Galapagos Art Space, Cave Canem, and Restoration, not to mention that musical behemoth called Carnegie Hall.  Samori’s involvement recently caught the attention of the the online newsletter for Bed-Stuy, Patch.com, which features local news about the Brooklyn region.  The Patch article also includes a sound clip of “When Randa wears Red,” featuring mezzo-soprano Nicole Mitchell.

After Songs from the F Train made its initial debut, three more songs were commissioned for Gilda Lyons, and her follow-up cycle, Songs from the A Train, made its debut as well.  In fact, the initiative has been so successful that AOP and The Walt Whitman Project will commission another three songs through Angeli’s Phat Phun Tuesdays, with performances scheduled for this June in Fort Greene Park.

But is Samori phased by all this well-deserved success?  Not one bit.  She admittedly still uses a script when she reads her poem aloud.  Though she does want to be a writer when she grows up.  Or a pediatrician.  Or a scientist. 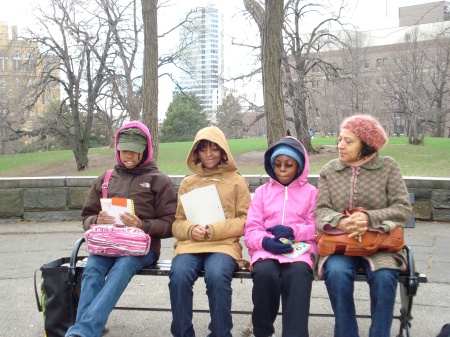 This entry was posted on Wednesday, April 6th, 2011 at 4:09 pm and is filed under American Opera Projects, Friends of AOP, I Hear America Singing, Press reviews and articles, Songs from the F Train. You can follow any responses to this entry through the RSS 2.0 feed. You can leave a response, or trackback from your own site.

One Response to Young AOP Poet featured on Patch.com