This September, AOP (American Opera Projects) and Opera on Tap will present a new installment of their acclaimed series, “OPERAtion Brooklyn,” at the newly launched BEAT Festival. The festival, which aims to showcase Brooklyn’s most innovative and forward-thinking emerging artists in theater, dance and voice, will be held from September 12-23 with performances in venues throughout the borough. AOP and Opera on Tap will present progressive new works of opera in a casual setting on September 13th (Flatbush Reformed Church), 19th (Brooklyn Conservatory of Music), and 22nd (Irondale Center) at 7:30pm. “OPERAtion Brooklyn” will include the world premiere of Daniel Felsenfeld’s song cycle A Genuine Willingness to Help (Book 1), songs from One Ring Zero, and scenes from AOP’s series, Composers & the Voice. More information and tickets can be found at www.beatbrooklyn.com/opera/. The concerts will also be featured as part of the Brooklyn Book Festival Bookend Events.

Opera on Tap will present works for voice and chamber ensemble by resident Brooklyn composers Daniel Felsenfeld and the Brooklyn indie outfit One Ring Zero. The works will be conducted by Yoon Jae Lee, with Mila Henry on piano, and performances by sopranos Marcy Richardson, Delea Shand, and mezzo-soprano Kayleigh Butcher. The program will include a world premiere of Felsenfeld’s song cycle A Genuine Willingness to Help (Book I). Part of the composer’s “Author Project,” the work is comprised of songs set to varied and expressive texts by some of New York’s best young writers, including Jonathan Lethem, Fiona Maazel, and Rick Moody. Felsenfeld’s song cycle Raw Footage: Composer’s Cut (text from Robert Coover’s novel Lucky Pierre) will also be performed. In addition, the program will include four songs drawn from One Ring Zero’s album As Smart As We Are (The Author Project). These “mysterious pop songs,” arranged for piano and chamber ensemble by Michael Hearst and Joshua Camp, have been called “both haunting and entertaining” by The New Yorker and feature texts by Margaret Atwood, Neil Gaiman, Isa Chandra Moskowitz, and David Wondrich. 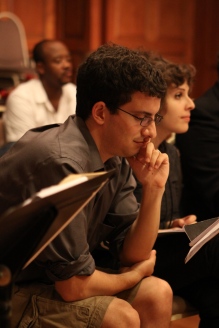 Zach Redler and Sara Cooper at a Composers & the Voice workshop.

With their 30th birthdays on the horizon, three friends worry what kind of men they are becoming after three decades of pop culture consumption and father figure issues in the humorous “Male Identity.” In “Stop and Frisk,” Joe and Sean, best friends and successful urban professionals, meet for an awkward lunch in the park and discuss the racial aftermath of Sean’s recent brush with police in a ‘Stop and Frisk’ search and investigation. “Stop and Frisk” is part of the opera-in-development Triptych in Grant Park.

The scenes were written as part of AOP’s free fellowship program Composers & the Voice (C&V) that provides composers and librettists experience working collaboratively with a group of singers on writing for the voice and the opera stage. In addition to the AOP training, distinguished composers Stephen Schwartz and Kaija Saariaho served as mentors to Zach & Sara and Sidney, respectively, in their official capacity as AOP Composer Chairs providing opportunities for discussion and one-on-one feedback.

Hailed as “a vital series” by TimeOut NY, “OPERAtion Brooklyn” is the partnership between Opera on Tap and American Opera Projects, two of Brooklyn’s most acclaimed producers of indie opera. The series aims to present the most daring of contemporary opera and song in a relaxed setting that encourages drinks and discussion as part of the new classical experience. Previously presented under the title Opera Grows in Brooklyn, the series premiered in March 2009 at Galapagos Art Space. The most recent collaboration, “Curioser & Curioser: An Opera-Burlesque Circus in Wonderland,” brought together the worlds of classical music and burlesque for a night of music and entertainment inspired by the tales of Alice in Wonderland. (www.operationbrooklyn.com)

For all BEAT performances, there will be general admission tickets available for $20, as well as tickets at the door that will be sold for a suggested donation of $20. For complete information and tickets visit www.beatbrooklyn.com .

This entry was posted on Friday, August 24th, 2012 at 4:38 pm and is filed under American Opera Projects, AOP on the Road, Composers & the Voice, Composers & the Voice 2011-12 workshops, OPERAtion Brooklyn, World Premieres. You can follow any responses to this entry through the RSS 2.0 feed. You can leave a response, or trackback from your own site.