Independence Eve, currently in development at AOP, to be presented at The Harlem School of the Arts

“Stop and Frisk” among three stories exploring a century of race relations.

NEW YORK, NY— American Opera Projects (AOP) and The Harlem School of the Arts present Independence Eve, a new chamber opera in three scenes that explores the troubled journey of race relations in America. The free concert performance will take place on Thursday, February 5 at 7:00PM at The Harlem School of the Arts (The Herb Alpert Center, 645 Saint Nicholas Avenue, New York, NY 10030). Composed by Sidney Marquez Boquiren with a libretto by Daniel Neer, the opera will include performances by baritone Jorell Williams and tenor Brandon Snook, while Mila Henry will provide music direction and piano. A talkback with the artists will follow the one hour concert moderated by composer Laura Kaminsky (As One) and HSA Voice Chair Yolanda Wyns.

Currently in development at AOP, Independence Eve is comprised of three unrelated scenes, each of which take place on July 3 on a park bench in an unspecified American city, in the years 1963, 2013, and 2063. Each story focuses on the relationship between two men, one white and one black, who struggle with identity and acceptance. Independence Eve is a study of black and white America, offering commentary on the intricacies of race relations and the insidious and persistent stain of racism that has remained consistent throughout American history.

The first scene, “Stop and Frisk,” has already received numerous community performances throughout Brooklyn and garnered attention from the press, including a recent Talk of the Town profile in The New Yorker.

Independence Eve is currently in development as part of AOP’s First Chance program that allows composers and librettists to hear their works-in-progress performed before an audience. Development of the opera began during Mr. Boquiren’s fellowship in the 2011-12 season of AOP’s composer training program Composers & the Voice with both Mr. Williams and Mr. Snook creating their roles. Development of the opera is made possible, in part, through generous funding by The Andrew W. Mellon Foundation and the New York Department of Cultural Affairs.

AOP plans to present the world premiere of Independence Eve at park benches around New York City in June 2015. 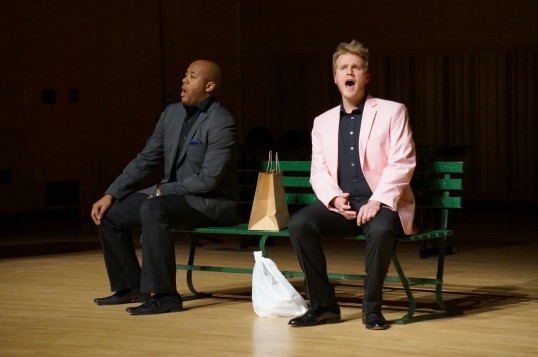 AOP and The Harlem School of the Arts present a staged concert performance of Independence Eve, a new chamber opera in three scenes by composer Sidney Marquez Boquiren and librettist Daniel Neer that explores the troubled journey of race relations in America. Followed by a Q&A with the artists. Part of the 2014 Composers Now Festival.

Sidney Marquez Boquiren is a composer-performer who grew up in the Philippines and Saudi Arabia but has spent most of his life in the United States. He collaborates with artists on various projects that include opera (Independence Eve with Daniel Neer); Biblical illumination (folia ligni for Spark and Echo Arts); and multi-media (The Gretel Project with Lauren K. Alleyne, Catherine Chung, and Tomiko Jones). As a pianist, he performs regularly with Rhymes With Opera and pulsoptional. A MacDowell Fellow, Sidney is currently the Chair of the Department of Music at Adelphi University in Garden City, New York, where he teaches music theory and composition. He is also a cantor and sings in the church choir of The Church of St. Francis Xavier in Manhattan.

Daniel Neer enjoys a diverse career as a singing actor and librettist. Recent projects include Bruce Bailey with Daniel Felsenfeld for the BEAT Festival, and BQE with Robinson McClellan for the Queens New Music Festival, (both commissioned by Two Sides Sounding). The opera Mercury Falling, with Chandler Carter, was presented at the Long Leaf Festival in Raleigh, North Carolina, and song set HAIKU-NYC with Ellen Mandel recently premiered at the BEAT Festival. Daniel’s auspicious collaboration with Sidney Boquiren began with the workshop of Odes to Earth and Air. Other recent premieres include two chamber works: The Good Doctor Windhager with Ronnie Reshef, and Summer, 1976 by Kim Sherman, both premiered by the lyricist and the Qube String Quartet in Columbus, Ohio.

Baritone Jorell Williams, winner of the Patricia and Heyward Gignilliat Silver Medal Award at the 2014 American Traditions Competition and acclaimed by The New York Times for his “magnificent, rich toned” baritone and his “perfect” comic timing, is gaining international success on both the opera and concert stages. His 2014/2015 season includes debuts with Finger Lakes Opera, Syracuse Opera, Opera on the Avalon, and premieres of new works with American Repertory Theater and American Opera Projects. Jorell is a recipient of top awards from the Gerda Lissner International Competition, Schuyler Foundation for Career Bridges, the Liberace Foundation, Sergei Koussevitzky Foundation, David Adams art song competition, Civic Morning Musicals Foundation, and the Charles A. Lynam Competition. For more information please visit: http://www.jorellmwilliams.com.

Tenor Brandon Snook has been praised by The New York Times for his “vocal freshness”, along with his “appealing and talented” nature, and has collaborated extensively with AOP, most notably being part of the 2011-12 Composers & the Voice Series. In addition to playing Little Bat in productions of Susannah in Tel Aviv, he premiered the role of Robert Johnson in Phil Kline and Jim Jarmusch’s opera Tesla in New York, Tony in the Off-Off Broadway production of Terrence McNally’s Master Class, and Frederic in The Pirates of Penzance in South Carolina. Additional mainstage credits include Cincinnati Opera, Michigan Opera Theatre, Des Moines Metro Opera, Sarasota Opera, Lyric Opera of Kansas City, and solo concert credits at Lincoln Center and Brooklyn Academy of Music. A native of Dallas, Texas, Brandon has voice degrees from the University of Kansas and the University of Michigan.

AOP‘s mission is to identify, develop and present new and innovative works of music-theatre by emerging and established artists and to engage our audiences in an immersive, transformative theatrical experience. At the forefront of the contemporary opera movement for a quarter-century, AOP creates, develops and presents opera and music theatre projects collaborating with young, rising and established artists in the field. AOP has produced over 30 world premieres, most recently Kaminsky/Reed/Campbell’s As One at BAM (2014), Nkeiru Okoye’s Harriet Tubman: When I Crossed That Line to Freedom (2014), and Lera Auerbach’s The Blind (2013), a co-production with Lincoln Center Festival. AOP-developed operas that premiered with co-producers include Gregory Spears’s Paul’s Case at PROTOTYPE (2014), Stephen Schwartz’s Séance on a Wet Afternoon at New York City Opera (2011), and Tarik O’Regan’s Heart of Darkness at London’s Royal Opera House (2011). www.operaprojects.org

Harlem School of the Arts (HSA) enriches the lives of young people and their families through world-class training in and exposure to the arts across multiple disciplines in an environment that emphasizes rigorous training, stimulates creativity, builds self-confidence, and adds a dimension of beauty to their lives. HSA achieves this on-site at The Herb Alpert Center by offering high-quality, affordable, arts training in dance, music, theatre, and visual art to ethnically and socio-economically diverse young people aged 2-18; by providing financial aid and merit scholarships to those who need it most; and by developing key partnerships with other cultural institutions, colleges/universities, and conservatories to prepare its aspiring pre-professional students at the highest possible level. They also reach beyond their walls to provide essential arts education residencies in New York City Public Schools through our Educational Outreach Program. HSA is a dynamic cultural institution that presents a range of high caliber performances, exhibitions and other programming for the community. In addition, they provide rental space/studios for established and emerging artists to rehearse, create and connect with HSA students. Harlem School of the Arts is able to achieve this with the exceptional participation of their family of loyal donors, dedicated parents, involved alumni and generous guest and resident artists. A future in the arts begins here! For more information, visit www.hsanyc.org.

All of us here at AOP are mourning the passing of talented artist and dear friend Lemuel Wade who lost his sudden battle with cancer on December 22. Lem directed the sold-out AOP hit Harriet Tubman: When I Crossed That Line to Freedom, which premiered in February 2014 in Brooklyn. Along with Tubman, Lem’s AOP projects included the concert version of Daniel Sonenberg’s The Summer King in Portland, Maine, Companionship and Dreaming of Wonderland at Manhattan School of Music, and numerous in-house workshops. He was laid to rest among family and friends in his native Chicago.

We are humbly moved that Lem’s family has selected AOP as one of the 3 charities for those interested in making contributions in Lem’s memory.