On September 9th, the American Opera Projects family joined At AOP’s Brooklyn home at South Oxford Space to celebrate the beginning of the latest cycle of Composers & the Voice. The new composers, librettists for the 2015-2017 C & V season were in attendance along with various alumni from past seasons.

Charles Jarden, the General Director of AOP opened the evening and Steven Osgood, the Artistic Director of Composers & The Voice, acknowledged new and veteran C&V participants. Composers & the Voice offers two-year fellowships for
composers and librettists which combines education with project development and performances. 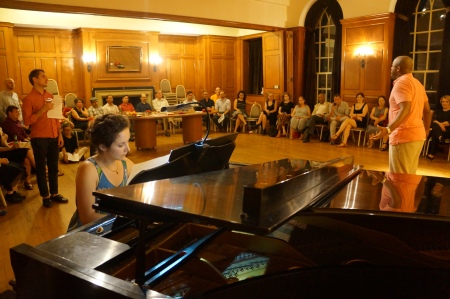 One of the biggest highlights of the evening was the announcement of the Genesis Fellowship Program and The Hermitage Artist Retreat. Composer Mikael Karlsson and librettist and visual designer Elle Kunnos de Voss will be the first two artists to attend. The two artists will be developing their opera The Echo Drift while in Florida. The Echo Drift is being developed by AOP to be produced in collaboration with HERE and Beth Morrison Projects. 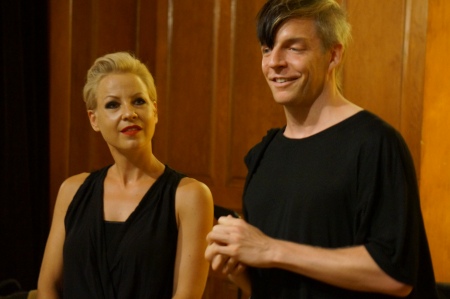 The night was a booming success, a great introduction for the new composers, a celebration of past compositions and composers, and a great start to a new chapter in American Opera Projects‘ long standing tradition in fostering and encouraging new music.

Charles Jarden believes “this new partnership with the Hermitage allows us to further support some of our most successful C&V fellows once they
have completed the program. The time they will be granted to develop their work at The Hermitage will enable these creative teams to prepare their works for full-scale production. In the current climate, there is much energy surrounding the development of new opera, but not always enough time for the creative process to unfold; the Genesis Fellowships directly address this, and we are all eager to see the work that results.” 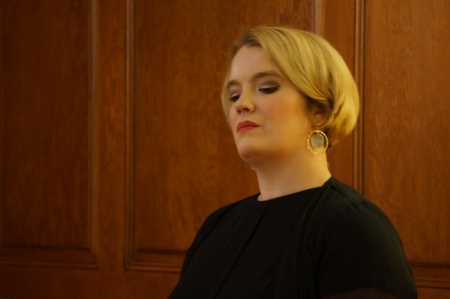 The Wanton Sublime hailed as emotionally captivating and beautifully written

The Wanton Sublime, composed by Tarik O’Regan with a libretto by American poet Anna Rabinowitz, focuses on the character of the Virgin Mary as she grapples with the terror of being chosen for a divine purpose. Originally developed in NYC with American Opera Projects, it was just performed at the Grimeborn Festival in East London. Hai Ting Chinn was the star in this one woman opera, conducted by Andrew Griffiths, who lead the Orpheus Sinfonia, and directed by Robert Shaw. A strong, well-rounded production, The Wanton Sublime gives a new voice to a classic figure through powerful text, beautiful melodic lines, a simple production, and atypical instrumentation. 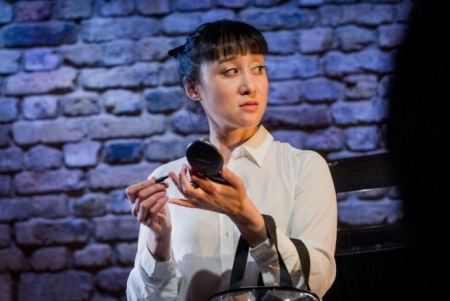 Tim Ashley, writing for The Guardian, applauded the “…bluesy rebelliousness and Monteverdian lyricism…” of Tarik O’Regan’s music in The Wanton Sublime, citing a beautiful moment in which the Virgin Mary is torn between her fear and her faith as “…Chinn sings against a playback of her own voice singing sacred texts…”. Rupert Christiansen of The Telegraph was also impressed by O’Regan’s music, praising its unfaltering heartbeat and melody “…weaving a richly melismatic vocal line into a strikingly coloured orchestral score delicately enhanced by electronic effects. Never sterile or mechanical it seems to have a living organic pulse.”

The What’sOnStage review  by Mark Valencia complemented the music and the characterization of the Virgin Mary calling the opera “…musically rich…and also philosophically absorbing.” Valencia appreciates how Rabinowitz presents Mary as”…a strong young woman who questions, challenges and even defies the God who has slated her to be the mother of Christ.” Tim Ashley (The Guardian) also enjoyed the emotional depth of the opera, “The underlying point, integral to much mystic literature, is that divine intervention has the bewildering potential to shatter lives and identities.” Edward Bhesania’s review for The Stage compliments Rabinowitz’s and O’Regan’s creative partnership as Mary’s character “…begins with incredulity and disdain before finally reaching acceptance, by which point both music and text have attained a more sublime tone.” The EveningStandard review, written by Barry Millington, also applauds their collaboration, stating “…Rabinowitz’s text explores the nervous longings of an idealised iconic figure, complemented by Tarik O’Regan’s inventive and attractive score…”

Valencia (What’sOnStage) also describes the minimalist staging by Robert Shaw “…commendably simple staging presents her as a power dressed young professional who changes midway through into simpler clothes that better assert her individuality. It’s a subtle transition, and beautifully judged.” Edward Bhesania (The Stage) complimented the instrumentation which “…uses a 9 piece band (including electric guitar and rums to underpin the journey of the Virgin Mary figure stripped of her iconic symbolism and grappling in today’s world of her unasked-for role.”

AOP began developing the monodrama in 2009 and co-produced its premiere at Roulette in Brooklyn in 2014. AOP had previously worked with Tarik O’Regan on his first opera Heart of Darkness and with Anna Rabinowitz on Darkling, another operatic adaptation of a book of her poetry. Darkling, music by Stefan Weisman, was commissioned and developed by AOP.