Announcing the winners of the 2017-19 Composers & the Voice fellowships! 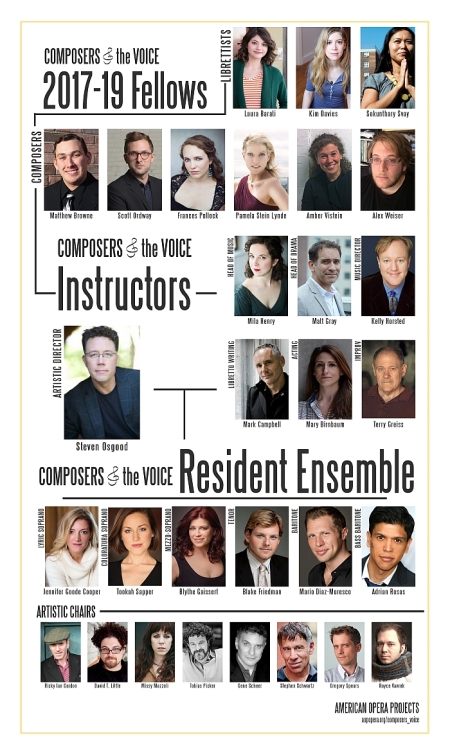 “The philosophy of Composers & the Voice since its beginning has been that by immersing composers and librettists in hands-on work with skilled singers and music directors, we empower them to create groundbreaking works that are true to each of their artistic languages,” says Osgood.  “Composers rarely have the opportunity to work with opera singers during their training, and C&V was designed to address this void. I could not be prouder of the commissions and premieres that have flowed to the alumni of C&V.”

The Composers & the Voice fellowships include a year of working with the company’s Resident Ensemble of Singers and Artistic Team, over 45 hours of “Skill-Building Sessions” of acting courses with director Mary Birnbaum (Die Zauberflöte at Juilliard), theatrical improvisation led by Terry Greiss (Co-Founder, Ensemble Actor, Executive Director of Irondale Ensemble Project), and libretto development with Libretto Writing Instructor Mark Campbell (Silent Night, The (R)evolution of Steve Jobs, As One), and two public concerts of new works. This is followed by a year of continued promotion and development through AOP and its strategic partnerships.

Support for AOP’s Composers & the Voice program is provided in part by a grant from The Andrew W. Mellon Foundation.

In addition, over 45 hours of “Skill-Building Sessions” for composers and librettists will provide an in-depth and firsthand knowledge of how singers build characters, act in scenes and sing text. These will include acting courses, theatrical improvisation, and libretto development, under the guidance Matt Gray (AOP Producing Director and Resident Dramaturg) in the newly formed position of Head of Drama.

At the end of the workshop sessions, AOP will present the results of the participants’ work in public performances – First Glimpse, a concert of songs in Spring 2018, and Six Scenes, an evening of short opera scenes in Fall 2018.

Following the Six Scenes performances, Composers & the Voice enters its second year of its two-year cycle and focuses on the development and further promotion of the Fellows’ C&V-created works. This includes potential workshops and readings in AOP’s “First Chance” opera development program, as well as in concert series that have included partnerships with Opera Memphis, The Manhattan School of Music, and Opera on Tap, to name a few.

The second year of the cycle will also include continued partnerships with The Hermitage Artist Retreat, which will select a C&V Fellow (or Fellowship team) to receive a 6-week residency to continue opera development at the Hermitage’s Florida estate, and the Chautauqua Opera Company, which annually invites one C&V alumnus to join the company for their 8-week summer season as a Composer-in-Residence and receive world premieres of three works commissioned by AOP.

HISTORY OF COMPOSERS & THE VOICE

Support for AOP’s Composers & the Voice program is provided in part by a grant from The Andrew W. Mellon Foundation. The Victor Herbert Foundation will sponsor one fellow’s expenses for travel and costs of preparing and producing scenes with The Victor Herbert Foundation Composers & the Voice Chair, created in memory of longtime opera supporter and former AOP board member, Lois C. Schwartz.

New York-based composer Matthew Browne’s music has been praised for its “unbridled humor” (New Music Box) and described as “witty” (The Strad) and “beautifully crafted and considered” (What’s On London).  He recently received honors such as the 2017 ASCAP Rudolf Nissim Prize, a BMI Student Composer Award (2015), an ASCAP Morton Gould Young Composers award (2014), fellow at CULTIVATE Copland House (2017), winner of the New England Philharmonic Call for Scores (2014), and participant at the Minnesota Orchestra Composers Institute (2016). Matthew has had the honor to collaborate with such ensembles as the Minnesota Orchestra, Alarm Will Sound, the Albany Symphony, the New Jersey Symphony, Milwaukee Symphony, the Milwaukee Symphony Orchestra, the New England Philharmonic, the Villiers Quartet, the Donald Sinta Quartet, the Tesla Quartet, and PUBLIQuartet. He received his DMA from the University of Michigan-Ann Arbor.  Previous teachers include Michael Daugherty and Kristin Kuster. www.matthewbrownecomposer.com

Scott Ordway (1984, Santa Cruz, California) is a composer, conductor, and Assistant Professor of Music Composition at Rutgers University. From 2014–17, he was a member of the faculty of the Curtis Institute of Music. In recent years, Ordway has focused on a series of extended works fusing vocal and instrumental music with original text, video, digital soundscape, and experimental theater. These compositions explore a diverse array of contemporary themes, including natural landscape, protest and revolution, and the lives of cities. His music has been called “exquisite” by The New York Times, “a marvel” by The Philadelphia Inquirer, and “an American response to Sibelius” by The Boston Globe, and has been presented by leading American and international festivals and institutions with projects in Berlin, Beijing, Tunis, Mexico City, New York, Los Angeles, Chicago, and Boston. In 2016, his debut recording with the Hong Kong Philharmonic was released on NAXOS Records.

Known for her “bold and bracing” (Baltimore Sun) opera writing, Frances Pollock’s music “pulls no punches and never flinches.” (City Paper) Originally from North Carolina, Frances’s music has been performed all over the country by the Bridge Ensemble, Prima Volta, The North Carolina Governors’ School, Divine Waters Ensemble, and many others. In 2015, she wrote her first opera, Stinney, which won multiple awards including JHU’s Diversity Innovation Grant and Best of Baltimore award. From 2016-2017, Frances was composer in residence for the Divine Water’s Ensemble. In 2016, Frances was commissioned by Washington National Opera to write an opera entitled What Gets Kept as part of the “American Opera Initiative” Festival. Frances is a founding member of the new music non-profit, Prima Volta. She holds a B.M. in Theory and Composition from Furman University and a M.M. Peabody Conservatory. Frances will be continuing her studies at Yale this coming fall.

Praised for her “rich dramatics” (The Boston Globe), Pamela Stein Lynde is a versatile classical singer, composer, educator, and producer.  As a composer, Pamela has had her works premiered by Oh My Ears Festival of Phoenix, Patchwork American Song Project, Guided Imagery Opera, TEDx Carnegie Lake, Contemporary Undercurrent of Song Project, and by many other performers across the US. As a performer, she has premiered works by some of today’s most prominent living composers, appearing with Yamaha Young Concert Artist Series, the Britten-Pears Young Artist Programme, Rhymes With Opera, New Music New Haven, Saratoga Fine Arts Festival, Beth Morrison Projects, The Bang on a Can Summer Institute at Mass MoCA, and many others. She can be heard as a vocalist on minimalist composer Alexander Turnquist’s latest album Flying Fantasy, released on the Western Vinyl label.  She is the founder and director of Stone Mason Projects, a production company specializing in new music for voice.

Amber Vistein is a composer and sound artist who is intensely interested in the physicality of sound and delves deeply into the poetics of timbre, texture, and gesture. She deploys a diverse array of techniques in her compositions to create complex ‘sonic worlds’ that blossom, radiate, and continually transform. Her use of electronics and digital signal processing further expands the expressive potential immanent within her sonic materials. These tools allow her to develop an immense range of sonorities and compose music designed to envelop the listener in an immersive, evolving situation. Amber is currently a PhD student in the Computer Music and Multimedia (MEME) department at Brown University and received her MFA from the Studio for Interrelated Media at Massachusetts College of Art and Design in 2013.

Broad gestures, rich textures, and narrative sweep are hallmarks of the “compelling” (New York Times), “shapely, melody-rich” (Wall Street Journal) music of composer Alex Weiser. Born and raised in New York City, Weiser creates acutely cosmopolitan music combining a deeply felt historical perspective with a vibrant forward-looking creativity. Weiser has been praised for writing “insightful” music “of great poetic depth” (Feast of Music), and for having a “sophisticated ear and knack for evoking luscious textures and imaginative yet approachable harmonies.” (I Care If You Listen). An energetic advocate for contemporary classical music and for the work of his peers, Weiser co-founded and directs Kettle Corn New Music, an “ever-enjoyable,” and “engaging” concert series which “creates that ideal listening environment that so many institutions aim for: relaxed, yet allowing for concentration,” (New York Times) and was for nearly five years a director of the MATA Festival, “the city’s leading showcase for vital new music by emerging composers.” (The New Yorker). Weiser is now the Public Programs Manager at the YIVO Institute for Jewish Research where he curates and produces programs that combine a fascination with and curiosity for historical context, with an eye toward influential Jewish contributions to the culture of today and tomorrow.

Laura Barati is a librettist, performer, and devisor of new works.  As a librettist, Laura wrote the short operas Uprising and Henna Leaves with composer Aleksandra Weil, both of which were developed by AOP + NYU.  Laura trained at Kenyon College, the National Theater Institute, the School at Steppenwolf, and received her M.F.A. in Graduate Musical Theatre Writing from NYU Tisch.  She’s worked with the Arden Theatre Company, Strawdog Theatre Company, Jackalope Theatre Company, and Cold Basement Dramatics.  Her writing has been performed in Chicago, Philadelphia, and New York, at venues including Don’t Tell Mama, Duplex, NYMF, Prospect Theater Company, and Barrington Stage Company.  Current projects include We Regret To Inform You That Reza Is Dead with the devising collective The Electric Brain and the musical How To Create A Young Girl, written with composer TJ Rubin.

Kim Davies is a 2016 fellow in Playwriting from the New York Foundation for the Arts.  Her play Smoke premiered at the Flea Theater in 2014 for a thrice-extended run, was a New York Times and Time Out New York Critics’ Pick, and has been produced in cities across the United States and in translation in Brazil. She is one of eight international writers selected by Ibsen International for their New Text, New Stage program and developed a new play with local theater artists in Beijing, Shanghai, and Guangzhou, China from 2015 to 2016 for a world premiere in Shanghai in 2017.  In collaboration with the Muse Project, she wrote Stet, which in 2016 had its world premiere at Abingdon Theatre Company.  Davies is a member of Youngblood at Ensemble Studio Theatre and the New Georges Jam, and received her MFA in playwriting from Brooklyn College.

Sokunthary Svay is a Pushcart-nominated Khmer writer and musician from the Bronx, New York. She and her family were refugees from Cambodia who survived the genocidal Khmer Rouge regime. She is the poetry editor for Newtown Literary and a founding member of the Cambodian American Literary Arts Association (CALAA). Svay was a subject in New York Magazine’s “Living in a Sanctuary City” portfolio and featured in the New York Immigration Coalition’s This is Our NY, broadcast in Times Square. Writing credits include Homelands: Women’s Journeys Across Race, Place and Time, FLESH, Prairie Schooner, Women’s Studies Quarterly, The Margins, and Mekong Review. Svay recently received her MA in Language & Literacy from CCNY (CUNY), where she will also be teaching college composition this fall. Her first book of poetry, Apsara in New York, will be published by Willow Books in September 2017.

This entry was posted on Thursday, July 20th, 2017 at 2:24 pm and is filed under American Opera Projects, AOP organizational news, Composers & the Voice, grants, press releases. You can follow any responses to this entry through the RSS 2.0 feed. Responses are currently closed, but you can trackback from your own site.