On January 20, the world premiere of THE ECHO DRIFT, with music by Mikael Karlsson, libretto by Elle Kunnos de Voss & Kathryn Walat, directed by Mallory Catlett and conducted by Nicholas DeMaison completed its six-performance run at Baruch Performing Arts Center in New York City as part of the 2018 Prototype Festival. Mezzo-soprano Blythe Gaissert starred as a convicted murderer trapped in a timeless prison and is unexpectedly befriended by a moth (actor John Kelly) with an offer of a perceived way to freedom. The experimental chamber opera, performed by members of ICE Ensemble and enhanced by electronic soundscape and animation, was enthusiastically received by both audiences and critics alike. 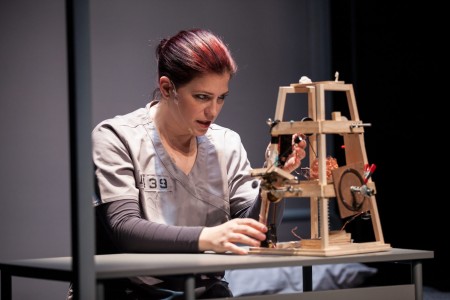 Blythe Gaissert as Walker Loats in The Echo Drift

“a startling science fiction conceit kickstarted the gripping one-act The Echo Drift. In this world premiere work, an inmate in a futuristic prison gets a visit from a talking moth that tries to persuade her than she can escape by rejecting her conventional sense of time and space. Everything about this presentation was virtuoso, from the psychedelic snarls and slithers in composer Mikael Karlsson’s orchestra writing to the sly, ironic whispers of actor John Kelly as the Moth. But the heart of the piece was the bravura singing of Blythe Gaissert as the panicky prisoner, her smoky mezzo biting into the wide-ranging and relentless vocal part with the violent abandon of a starving shark.” – The Observer

“Stark and intricate, propulsive and a little film-noir, “The Echo Drift” is most exciting when it is fast and cacophonous, nearly overwhelming the senses.” – The New York Times

“a totally original and stunning, immersive piece… with a scintillating score composed by Mikael Karlsson, and a brilliant environmental production by Elle Kunnos de Voss in their first collaboration. … Gaissert is wonderful as Loats, giving herself over totally to the fantasy world that the creators have presented to her, more than holding her own vocally in the powerful and audacious orchestral setting–by turns jazzy, acoustic, electronic, melodic, atonal, soothing, blasting–that the composer has devised.” – Broadway World

“seventy immersive minutes of six-channel surround sound and projected animations … The score was modest, absorbing, and lush …  For a story about a convicted murderer in solitary confinement, The Echo Drift is surprisingly accessible and apolitical. … Gaissert and Kelly fully embraced the sophisticated score and meta set, and The Echo Drift balanced an immersive multidimensional experience with a refreshing affirmation of human solidarity.” – I Care If You Listen

“Nicholas DeMaison conducted with unwavering clarity, helped by seven superb musicians from the International Contemporary Ensemble. Levy Lorenzo’s electronics wizardry—effectively an eighth instrument—creates unusually vivid textures, such as the complex, machine-like chords repeated near the end, tolling like otherworldly bells. … It is hard to sufficiently praise soprano Blythe Gaissert as Loats, singing tirelessly over the course of the opera’s 70 minutes.” – Musical America

“The Echo Drift struck an admirable balance between evocative score and creative composition, and is easily worthy of a pure listen without the staging. Karlsson’s subtle but crucial electronic elements were particularly noteworthy, threading through the live performers with magnetic textures… singers and musicians alike made this small chamber opera a grand production.” – Seen and Heard International

In a tension-filled final day, Gaissert took ill and made the difficult decision not to perform. Her cover Kathryn Krasovec stepped in with only a few hours of rehearsal under her belt and gave a powerful performance that captivated the audience on the opera’s final night.

The Echo Drift was commissioned, developed and produced by Beth Morrison Projects, HERE, and American Opera Projects. The Echo Drift was originally developed by Mikael Karlsson and Elle Kunnos de Voss in a full-length workshop presented by the Embassy of Sweden in Washington DC in 2014. Additional development was provided through the Opera Genesis Fellowship, a residency at the Hermitage Artist Retreat, made in partnership with American Opera Projects. 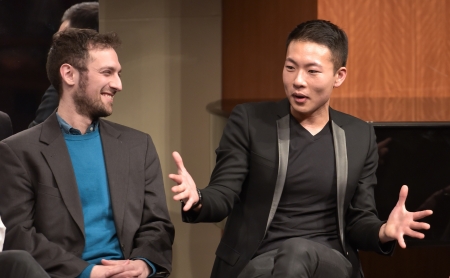 The award includes a six-week Hermitage residency, in which these two artists will work on their new opera Legendary, about the drag balls of the 1980s in New York City. The Opera Genesis Fellowship awards are presented annually to artists who have completed training in AOP’s Composer & the Voice (C&V) training program which helps to develop contemporary American opera.

The first fellowships were awarded to the creative team of Mikael Karlsson and co-librettist and visual designer Elle Kunnos de Voss along with co-librettist Kathryn Walat. Their opera, The Echo Drift, on which they worked during their time at the Hermitage, will premiere at the Prototype Festival in January at Baruch Performing Arts Center, New York City.

Hermitage Executive Director Bruce E. Rodgers remarked that “seeing the program come into being with the announcement of the first recipients was very exciting. We exist to inspire and assist artists in the creation of new work. AOP takes it to the next level so that the work can be presented to the public. We are now seeing the fruition of the first fellowship with the world premiere of The Echo Drift, and are eagerly looking forward to welcoming Joe and Jason.”

Charles Jarden, General Director of American Opera Projects, noted, “seeing how much the development of The Echo Drift benefited from the creators’ time at the Hermitage makes me eager to see what new ideas will be sparked when Joe and Jason find their way there this coming year. With so much faith in these two creative artists, AOP is now in the early stages of negotiation about where Legendary will be brought to its full production in an upcoming season.”

American Opera Projects’ Composers & the Voice is a two-year fellowship for composers and librettists which provides experience working collaboratively with singers on writing for the voice and opera stage. This free training includes a year of working with the company’s resident ensemble of singers and artistic team, followed by a year of continued promotion and development through AOP and its strategic partnerships. Launched in 2002, C&V has fostered the development of sixty-three composers & librettists. Alumni works that went through AOP’s opera development program and continued to a world premiere include Love/Hate (ODC/San Francisco Opera 2012, Jack Perla), Paul’s Case (UrbanArias 2013, Gregory Spears), and The Scarlet Ibis (Prototype 2015, Stefan Weisman). AOP’s C&V program is generously supported by a multi-year award from The Andrew W. Mellon Foundation.

ABOUT THE NEW FELLOWS

Joseph N. Rubinstein grew up in Newport News, VA and currently lives in New York City. Joseph’s music is often concerned with dramatic narrative and character, and has been presented by Fort Worth Opera Festival, The Manhattan School of Music Opera Theater, Triad: The Boston Choral Collective, American Opera Projects, The Holy Cross Chamber Singers, The Secret Opera, bass-baritone Matthew Burns at the Spoleto Festival USA, Boston Metro Opera, C4, the Society for New Music, and the Young New Yorker’s Chorus, among others. Recent performances include scenes from Legendary in a 2017 workshop by American Opera Projects, scenes from Legendary on Fort Worth Opera Festival’s 2016 “Frontiers” program, the premiere of “Birthday Song” on Sparks and Wiry Cries inaugural songSLAM, and a new choral work as part of Novi Cantori’s 2017 Composers Forum.  In 2016, he was a fellow in New Dramatists’ Composer-Librettist Studio.  Select works are published by See-A-Dot Music and recorded on 4Tay Records.  He studied music at Columbia University (BA) and The Juilliard School (MM).

Jason Kim is a Korean-born dramatist based in New York City. His immersive musical KPOP recently completed a critically acclaimed sold-out run at Ars Nova Theater. His play The Model American opened the Nikos Stage at the 2017 Williamstown Theatre Festival. His work has been presented at Ma-Yi, Keen Company, Naked Angels, The Flea, Kennedy Center for the Performing Arts, Washington National Opera, Fort Worth Opera, Manhattan School of Music, Spoleto Festival, Opera America, and others. He is an IFP—Marcie Bloom Fellow in Film, a Screenwriters Colony Fellow, a Paul & Daisy Soros Fellow for New Americans, and a Librettist Fellow in American Opera Project’s Composers & The Voice. He is a member of the Ma-Yi Writers Lab and Ars Nova’s Uncharted. He is currently LCT3’s Resident Writer. In television, he has written for HBO’s Girls and Fox’s Gracepoint and has adapted The Middlesteins for Showtime. He is also a Consulting Producer for Love on Netflix. BA Columbia University, MFA New School for Drama. www.waytooserious.com

About the Hermitage Artist Retreat

The Hermitage is a not-for-profit artist retreat located at 6660 Manasota Key Road in Englewood, FL.  It invites accomplished painters, sculptors, writers, playwrights, poets, composers and other artists from all over the world for residencies on its beachfront historic campus. Artists are asked to contribute two services to the community during their stay and as a result, Hermitage artists touch thousands of Gulf Coast community residents with unique and inspiring programs each year. In addition, the Hermitage awards and administers the prestigious Greenfield Prize, an annual $30,000 commission for a new work of art, rotating among three disciplines: visual art, music and drama. The Hermitage also partners with the Aspen Music Festival and School to award the annual Hermitage Prize to a composition student during the Festival. For more information about The Hermitage Artist Retreat, call 941-475-2098 or visit the website at www.HermitageArtistRetreat.org.

At the forefront of the contemporary opera movement for a quarter-century, AOP creates, develops and presents opera and music theatre projects collaborating with young, rising and established artists in the field. AOP has been a producer on over 30 world premieres, including Kaminsky/Reed/Campbell’s As One (BAM 2014), Lera Auerbach’s The Blind (Lincoln Center Festival 2013), Davis/Pelsue’s Hagoromo (BAM 2015 Next Wave Festival), a dance opera starring Wendy Whelan and Jock Soto, and Paterson/Cote’s Three Way (Nashville Opera and BAM 2017).  www.aopopera.org

Press material is available at: http://aopopera.org/press