More Praise for “Before Night Falls” 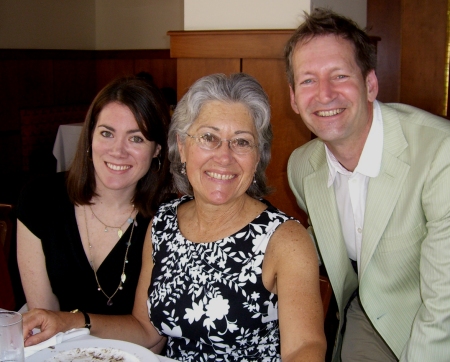 Charles Jarden, Executive Director of AOP, with Gloria Koch (daughter of the late Dolores Koch, co-librettist of Before Night Falls and friend of Reinaldo Arenas) and her daughter.

A full month after it’s world premiere with Fort Worth Opera, Before Night Falls, a new opera by Jorge Martín, is still receiving rave reviews. Before Night Falls tells the compelling story of gay Cuban counterrevolutionary Reinaldo Arenas and his struggles as a political dissident and homosexual in both Cuba and America.

“Vibrant, musically substantive, and very touching… One of the most admirable American operas of recent years.”

“Although Martín’s score is eclectic, it is not annoyingly pastiche-like. It is nicely shape-shifting. And it all coheres. The orchestration often has a beautiful sheen: transparent but not thin or barren. And I will tell you something extraordinary: Before Night Falls is full of arias, duets, trios, and choruses. There are real, unabashed melodies and tunes. That is old-fashioned; indeed, it is well-nigh counterrevolutionary.”

Make sure to check out AOP’s earlier blog post about the Fort Worth performance of Before Night Falls here.

Foreground, from left: Javier Abreu as Pepe and Wes Mason as Reinaldo Arenas. Photo by Robert Hart for TheaterJones.com.

Jorge Martín’s new opera Before Night Falls, presented by Fort Worth Opera, premiered in the Bass Performance Hall last Saturday evening, May 29th and is quickly becoming the talk of the opera world. The press and blogosphere have chimed as well about the AOP-developed opera, saying:

“Martín’s Before Night Falls succeeds musically and as work of theater…Martín has imbued his score with many lovely moments that evoke the Latin rhythms of Cuba and the musical atmosphere, such as popular songs and film scores, of the various eras he invokes. He does this deftly while still sounding fresh and original… Unlike many cotemporary composers, Martín has a gift for melody and he isn’t afraid to use it.”

“…a daring departure from tradition.”

“This work is infused with magnificent Cuban-style music that truly reflects the time as well as gives a feel for the heritage.”

Before Night Falls, based on the novel with the same name by Reinaldo Arenas, tracks the harsh life of a political dissident and gay man in Fidel Castro’s Cuba. The production, directed by David Gately and with stirring and provocative projections by designers Peter Nigrini, featured Wes Mason and Jonathan Blalock. AOP helped develop the work in a series of workshops in 2005.