Fort Worth Opera announced yesterday that their recording of Jorge Martín’s opera Before Night Falls, which was given its world premiere at FWO this past spring, will be released on Amazon.com on October 1st.  American Opera Projects was lucky enough to have given the opera its first concert reading of scenes from Act I back in 2004, when they were presented as part of the Dance Theater Workshop here in New York, and again in 2005, at the Clark Studio Theatre at Lincoln Center (during the Third Annual Cuban Arts Festival).

Before Night Falls traces the life of Cuban poet Reinaldo Arenas, beginning with his early years growing up in poverty in Cuba, to his emigration to the US in 1980, to his last decade suffering from AIDS.  Based on his famous memoir, the opera follows his trials and tribulations as a political prisoner forced to smuggle his manuscripts abroad for publication.

Joshua Rosenblum of Opera News raved in his May 2010 article,

“Martín’s opera…bursts with restless passion and sustains a dark undertone of anxiety throughout. The composer skillfully draws on numerous influences, including suave Cuban dance rhythms, which are sometimes overt but more often dextrously embedded within the colorful orchestral texture. In addition, one is reminded variously of Mahler, Shostakovich, Ravel, Villa-Lobos and even Varèse…but Martín has the skill and individuality to synthesize these strands into a coherent and dramatically potent tapestry. Best of all, his melodies almost always blossom and sing, even in the extended recitative-style dialogue.” To continue reading, click here.

Interested in pre-ordering?  Purchase Before Night Falls on Amazon.

More Praise for “Before Night Falls”

Charles Jarden, Executive Director of AOP, with Gloria Koch (daughter of the late Dolores Koch, co-librettist of Before Night Falls and friend of Reinaldo Arenas) and her daughter.

A full month after it’s world premiere with Fort Worth Opera, Before Night Falls, a new opera by Jorge Martín, is still receiving rave reviews. Before Night Falls tells the compelling story of gay Cuban counterrevolutionary Reinaldo Arenas and his struggles as a political dissident and homosexual in both Cuba and America.

“Vibrant, musically substantive, and very touching… One of the most admirable American operas of recent years.”

“Although Martín’s score is eclectic, it is not annoyingly pastiche-like. It is nicely shape-shifting. And it all coheres. The orchestration often has a beautiful sheen: transparent but not thin or barren. And I will tell you something extraordinary: Before Night Falls is full of arias, duets, trios, and choruses. There are real, unabashed melodies and tunes. That is old-fashioned; indeed, it is well-nigh counterrevolutionary.”

Make sure to check out AOP’s earlier blog post about the Fort Worth performance of Before Night Falls here.

Foreground, from left: Javier Abreu as Pepe and Wes Mason as Reinaldo Arenas. Photo by Robert Hart for TheaterJones.com.

Jorge Martín’s new opera Before Night Falls, presented by Fort Worth Opera, premiered in the Bass Performance Hall last Saturday evening, May 29th and is quickly becoming the talk of the opera world. The press and blogosphere have chimed as well about the AOP-developed opera, saying:

“Martín’s Before Night Falls succeeds musically and as work of theater…Martín has imbued his score with many lovely moments that evoke the Latin rhythms of Cuba and the musical atmosphere, such as popular songs and film scores, of the various eras he invokes. He does this deftly while still sounding fresh and original… Unlike many cotemporary composers, Martín has a gift for melody and he isn’t afraid to use it.”

“…a daring departure from tradition.”

“This work is infused with magnificent Cuban-style music that truly reflects the time as well as gives a feel for the heritage.”

Before Night Falls, based on the novel with the same name by Reinaldo Arenas, tracks the harsh life of a political dissident and gay man in Fidel Castro’s Cuba. The production, directed by David Gately and with stirring and provocative projections by designers Peter Nigrini, featured Wes Mason and Jonathan Blalock. AOP helped develop the work in a series of workshops in 2005.

Opera Chic: Before Night Falls one of the top 5 to see 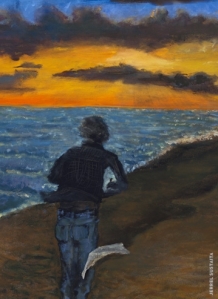 The upcoming world premiere of Jorge Martín‘s opera Before Night Falls continues be all the buzz for the Spring opera season. Just last month the AOP-developed opera was called a “must-see” event by Travel and Leisure and now the notorious Opera Chic has told W magazine that it is her pick for one of “the top five productions that will be in American and European opera houses from now to the beginning of summer.”

We couldn’t agree more. Find out the rest of her list here…

Do you enjoy travel? How about leisure? Then why not hop on a plane for Fort Worth in May and kick back to a world premiere of the AOP-developed opera Before Night Falls which was just chosen by Travel and Leisure magazine as a “must-see” event in 2010? (yeesh, that was corny. sorry.)