Flanigan and Malfitano: A “Family” Reunion

A “family” show of sorts (but not one for the kiddies), The Family Room is Thomas Pasatieri’s terrifying new one-act opera that marks the first collaboration between American Opera Projects and Opera New Jersey.  The libretto was written by Daphne Malfitano and stars the legendary sopranos Lauren Flanigan and Catherine Malfitano, with stage direction by Scott Schwartz.  Chris Cooley assists on piano.

We find two nameless women living in a windowless studio.
They speak of dinner parties and relatives,
of husbands and love and a child named Georgie,
but their only company are ominous sounds from above.
There is life up there, but we are stuck as they are,
beneath it, in The Family Room. 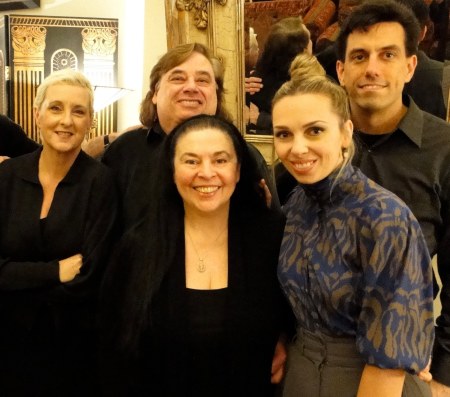 Since its initial readings in 2009, The Family Room has indeed been a close-knit process between creators and performers.  Written specifically for these two leading singing actresses, the opera marks the first time that Lauren Flanigan and Catherine Malfitano have performed together since the premiere of William Bolcom’s The Wedding in 2004, and also the first time that librettist Daphne Malfitano has worked on a project with her mother.  Previous projects composed for both sopranos by Pasatieri include Frau Margot and Monologues for Ms. Flanigan and Washington Square and The Seagull for Ms. Malfitano.  Similarly, Ms. Flanigan and director Scott Schwartz recently collaborated on NYCO’s Séance on a Wet Afternoon.  Not to mention that pianist Chris Cooley, who assisted on AOP’s initial readings of Séance, has been involved since the The Family Room’s beginning stages.

The latest installment of our First Chance Series, American Opera Projects co-presents The Family Room with Opera New Jersey, an idea that was dreamed up between AOP General Director Charles Jarden and ONJ General Director Richard Russell as an opportunity for the two companies to create a new partnership.  With a powerhouse cast and a creative team such as these, this is one family gathering you’re not likely to forget.

Talk-backs with the creators and cast to follow each performance.