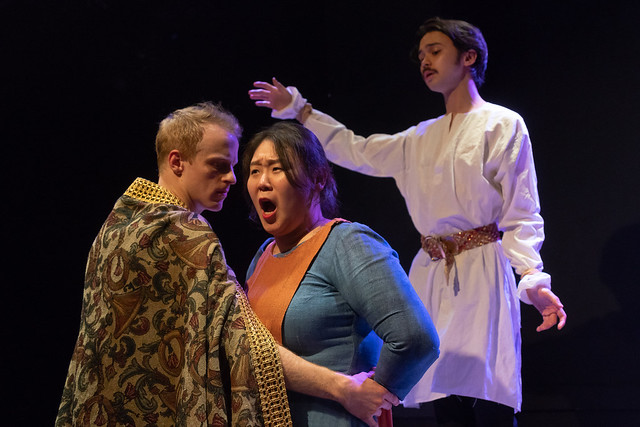 Nathaniel Sullivan, Yoojin Lee, and Jordan Rutter in “A Drop in the Ocean” Photo by Steven Pisano Photography

If you had a chance to see the Dinner Party Operas recently presented by AOP, the Brooklyn Museum, and NYU Tisch’s Opera Writing Workshop, we hope you are! (And if you didn’t, all of the operas are available on AOP’s YouTube page in their entirety here!)

The two performances were the culmination of the 2017-2018 session of the NYU Tisch Graduate Musical Theatre Writing Program’s Opera Lab. Collectively they featured eleven short operas written and composed by NYU graduate students and performed by AOP’s professional opera singers Keith Browning, Alexa Jarvis, Kathryn Krasovec, Yoojin Lee, Nicole Mitchell, Jordan Rutter, Nathaniel Sullivan, and Amelia Watkins, who additionally acted as mentors through the duration of the program. The operas themselves were inspired by The Dinner Party, an installation of feminist artwork by Judy Chicago currently housed at Brooklyn Museum.

The Dinner Party, an important icon of 1970s feminist art and a milestone in twentieth-century art, is presented as the centerpiece around which the Brooklyn Museum’s Elizabeth A. Sackler Center for Feminist Art is organized. The Dinner Party comprises a massive ceremonial banquet, arranged on a triangular table with a total of thirty-nine place settings, each commemorating an important woman from history. The settings consist of embroidered runners, gold chalices and utensils, and china-painted porcelain plates with raised central motifs that are based on vulvar and butterfly forms and rendered in styles appropriate to the individual women being honored. The names of another 999 women are inscribed in gold on the white tile floor below the triangular table. This permanent installation is enhanced by rotating Herstory Gallery exhibitions relating to the 1,038 women honored at the table. 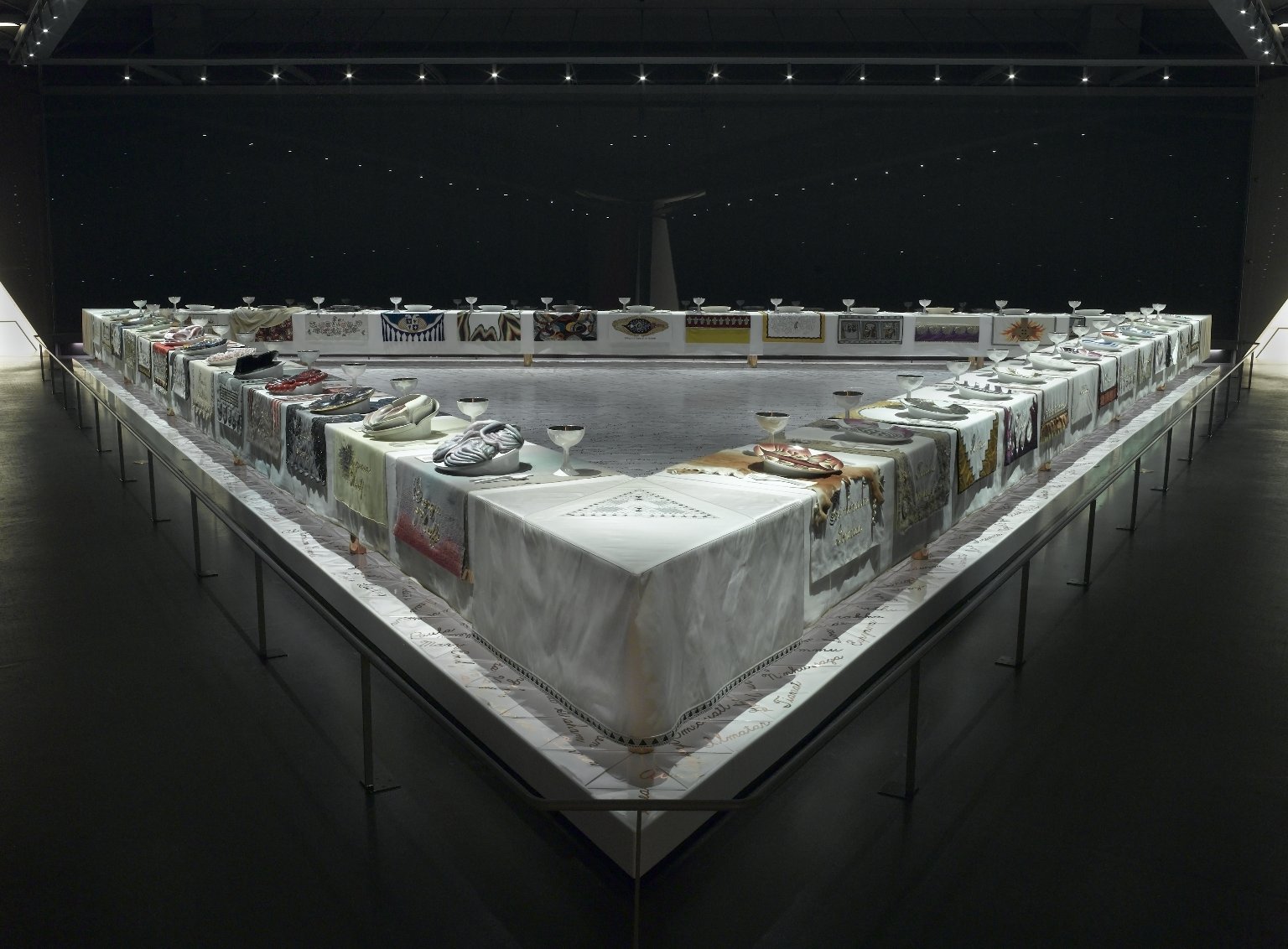 Some students chose to interpret the mythos of these women literally, while others reimagined their lives or simply drew inspiration. The historic pieces included “Master” in which Emily Dickinson reckons with the life of her poetry in the aftermath of her death. It featured music by Jacinth Greywoode and libretto by Deepali Gupta. In “A Drop in the Ocean” (music by Bryan Blaskie and libretto by Christine Claudel Filimonova), Christine de Pizan, the first women to earn a living wage as a writer, interviewed for her first job after the death of her husband. Spencer Robelen and Seth Christenfeld’s “An Unbroken Line” took place in Egypt, 1458 BC when the pharaoh Hatshepsut, in the twilight of her reign, is beset by palace intrigue orchestrated by her sister and carried out by her heir. “Waiting for the Rain” built from the legacy of Hildegard von Bingen, a medieval nun, composer, scientist, and prophetess, with music by Kevin Cummines and a libretto by Clara Luthas. “Judith and Holofernes” (music by Mehmet Salih Yildirim and libretto by Lily Dwoskin) depicted the Biblical heroine, Judith, and her slaughter of the infamous General Holofernes.

Other operas took a more varied approach, some reinventing the mythos of the women and some using them in a contemporary context. “Petronilla” (Music by Kent Jeong-Eun Kim and libretto by Zach Childers) imagined a scene between Lady Alice and her maid Petronilla de Meath, the first Irish woman to be burned at the stake for witchcraft during the Middle Ages, as a playful comedy; “Ár n-Athair” (music by Benedict Braxton-Smith and libretto by Nick Stephens) also took on the subject of a woman accused of witchcraft, this time revolving around the alliance between Goodwife “Goody” Ann Glover and a pirate when they are both imprisoned by the powerful Cotton Mather; “President Joan (Or the Unexpected Virtue of Sandwiches)” retold the myth of Pope Joan, but set it in the farce that is modern U.S. politics. Music by Boram Han and libretto by Cal Silberstein; The Byzantine Empress “Theodora” helped a young modern professional stuck in a dead-end job surrounded by misogynistic co-workers in the opera with music by Minhui Lee and libretto by Benji Goldsmith; “Women’s Work” (Music by Benji Goldsmith and libretto by Seth Christenfeld) also featured a modern setting for its story of an artist forced to reckon with her white privilege after a black friend confronts her over her work – a scultural bust of Sojourner Truth. And “Avery and Ainsley” took The Dinner Party as a whole for inspiration, exploring not one of the women represented, but the piece itself and its perceived role in the surreal opera by Jonathan Fadner and Scott R. Ritter. 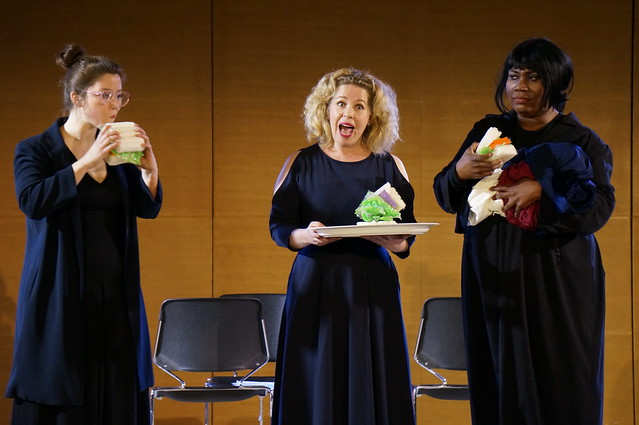 Alexa Jarvis, Amelia Watkins, and Nicole Mitchell in “President Joan (Or the Unexpected Virtue of Sandwiches)” Photo by Matt Gray.

The operas were split between two performances. The full house at the Wednesday, May 23 performance at NYU Tisch’s Black Box Theatre saw six operas with music direction by Mila Henry, directed by students from The New School, and designed by students from the NYU Tisch Department of Design. On Sunday, May 27 at the Brooklyn Museum the remaining five operas were presented under the stage direction of Luke Leonard and music direction of James Lowe to an equally large audience who were able to then visit the installation after the performance.

The Opera Lab was led by Professors Randall Eng of Tisch’s Graduate Musical Theater Writing Program and Sam Helfrich of the Tisch Department of Design, in partnership with American Opera Projects. 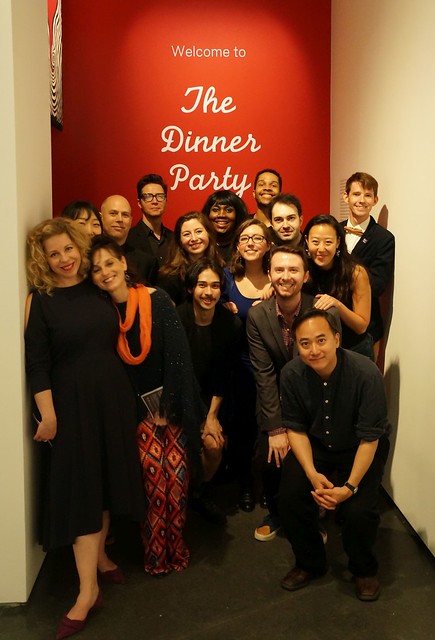 For over 50 years, the NYU Tisch School of the Arts has drawn on the vast artistic and cultural resources of New York City and New York University to create an extraordinary training ground for the individual artist and scholar of the arts. Today, students learn their craft in a spirited, risk-taking environment that combines the professional training of a conservatory with the liberal arts education of a premier global university with campuses in New York, Abu Dhabi, Shanghai, and 11 academic centers around the world. Learn more at www.tisch.nyu.edu.

The Brooklyn Museum presents important art in eye-opening ways, and has long been at the forefront of engagement with underserved and younger audiences, from its widely popular Target First Saturdays program and creative reinstallations of its permanent collection, to its pioneering online presence and inventive use of technology in reimagining the visitor experience. A driving force behind the massive growth and energy of the Borough of Brooklyn and of its diverse cultural community, the Brooklyn Museum annually welcomes more than half a million visitors who represent one of New York’s most diverse museum-going audiences.

With roots dating back to 1823, the Brooklyn Museum is one of the oldest and largest museums in the United States, with a collection representing nearly every culture, ranging from some of the most important ancient Egyptian works in the nation; to the arts of the Pacific Islands, Asia, Africa, and the Islamic world; to American and European art; to international contemporary work. The Brooklyn Museum is home to the Elizabeth A. Sackler Center for Feminist Art, the only facility of its kind in the country. For more information, visit www.brooklynmuseum.org

The Dinner Party Operas
Short operas inspired by Judy Chicago’s The Dinner Party
A collaboration between NYU’s Tisch School of the Arts, American Opera Projects, and the Brooklyn Museum

NEW YORK, NY – The Dinner Party Operas, a showcase of eleven original mini-operas inspired by Judy Chicago’s iconic feminist installation The Dinner Party, a multi-media work housed in the Brooklyn Museum, will be presented this May in New York City by the NYU Tisch Graduate Musical Theatre Writing Program (GMTWP), the Brooklyn Museum, the NYU Tisch Department of Design for Stage & Film and American Opera Projects (AOP). Six of the operas will be performed on Wednesday, May 23 at 7:30 p.m. at NYU Tisch’s GMTWP Black Box Theatre, located in Manhattan at 715 Broadway, between Washington and Waverly places, on the second floor. The remaining five operas will be performed on Sunday, May 27 at 2:00 p.m. at the Iris and B. Gerald Cantor Auditorium at the Brooklyn Museum, 200 Eastern Parkway, Brooklyn, NY 11238. Each under 15-minutes long, the operas were written and composed by students in the NYU Tisch GMTWP Opera Lab and will be performed by professional opera singers with piano accompaniment. The Dinner Party Operas is free with advance registration (May 23) or museum admission (May 27) and open to the public. To reserve tickets for the May 23 performance at NYU, email tisch.ipa@nyu.edu. Complete info at www.aopopera.org.

The Dinner Party Operas is the most recent production of Tisch GMTWP’s Opera Lab program, through which students write, compose, develop, and design original operas performed by professional opera singers. Opera Lab was started in 2015 by GMTWP professor Randall Eng with Design Dept. professor Sam Helfrich, and is open to both students and alumni. In previous years, the program’s mini-operas were created on the subjects of Brooklyn’s historic Fort Greene Park and New York City’s International House, which houses and supports international students and entrepreneurs from around the world.

The Dinner Party, an important icon of 1970s feminist art and a milestone in twentieth-century art, is presented as the centerpiece around which the Brooklyn Museum’s Elizabeth A. Sackler Center for Feminist Art is organized. The Dinner Party comprises a massive ceremonial banquet, arranged on a triangular table with a total of thirty-nine place settings, each commemorating an important woman from history. The settings consist of embroidered runners, gold chalices and utensils, and china-painted porcelain plates with raised central motifs that are based on vulvar and butterfly forms and rendered in styles appropriate to the individual women being honored. The names of another 999 women are inscribed in gold on the white tile floor below the triangular table. This permanent installation is enhanced by rotating Herstory Gallery exhibitions relating to the 1,038 women honored at the table. The pharaoh Hatshepsut; the medieval nun, composer, scientist, and prophetess Hildegard von Bingen; and writer Emily Dickinson are just three of the famous women from Judy Chicago’s art installation who serve as muses for this year’s operas.

“The Dinner Party contains a multitude of stories, and was created in part to encourage viewers to investigate those stories,” said Eng. “In these operas, the students have done exactly that, as they transform the visual and historic into music and theatre. Some of the operas celebrate moments in the lives of specific women, while others confront the work as a whole, and it’s been a joy to see the range of operatic responses—from comic farce to meditative reflection to heightened tragedy to impassioned critique.”

In addition to Profs. Eng and Helfrich, NYU Tisch’s GMTWP Opera Lab is led by Music Directors Mila Henry and James Lowe, who will provide piano accompaniment for the performances. Stage directors and designers from the NYU Tisch Graduate Department of Design for Stage and Film will stage the works in Program A under the guidance of Prof. Helfrich. Luke Leonard will direct the Program B operas.