Galapagos Art Space was the place to be for another night of drinks and drama at Opera Grows in Brooklyn, the hit series from AOP and Opera on Tap.

Just look at what the blogs had to say… 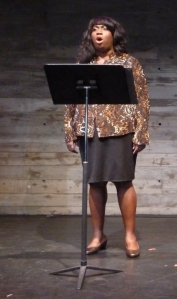 “…it seems clear that the Brooklyn hipster is destined to be the next audience for opera.”

“…once again some amazing surprises were presented by this rag-tag bunch of very experimental artists.”

“…the old and new guard of opera viewers mingled in an open-minded night of musical experimentation.”

“I for one do not intend to miss another installment of this remarkable series!!! … the eclectic and sometimes challenging musical offerings [are] beautifully framed by the contemporary space and the relaxed, social atmosphere.”

The July 9 show kicked off with the rousing set Brooklyn Poets – Past and Present, a combination of songs from AOP and the Walt Whitman Project’s Calamus Songs (Daniel Felsenfeld, Andrew Staniland) and “Songs from Hood to Riches” (Gilda Lyons). Soprano Adrienne Danrich and cellist Hamilton Berry drew thunderous applause for the Whitman settings and mezzo Nicole Mitchell continued her dramatic interpretations of Lyons’s songs based on the poetry of Brooklyn children featuring longtime AOP artist Kelly Horsted on the piano.

Ross Benoliel and Indre Viskontas get busy in the "Chamber"

The night continued with singer/songwriter Corey Dargel’s Removable Parts, a disturbing and touching series of portraits about voluntary amputees featuring the incredible piano stylings of Kathleen Supové. Soprano Indre Viskontas and baritone Ross Benoliel brought sexy back with The Bloody Chamber by Daniel Felsenfeld, a new opera being developed by the former C&V composer (prolific, ain’t he?) and staged by the Vineyard Theater’s Sarah Stern.

Opera Grows in Brooklyn will return to Galapagos in 2010 on October 15 and December 10 with all new cutting edge scenes and songs. Mark your calendars now!